A number of diseases and illnesses can be traced to environmental factors related to poor indoor air quality.

Common allergies (which are medically referred to as Chronic Allergic Rhinitis) are caused by exposures to materials that have allergenic / antigenic properties. If an individual becomes sensitized, then inhalation or mucous membrane / skin contact exposures may result in inflammatory responses in the nose, throat, sinuses, eyes and upper airways. Typical symptoms are increased mucus / phlegm production, runny eyes and nose, as well as sneezing and coughing as the body attempts to expectorate these irritants.

These symptoms arise as a part of the bodily defense against foreign materials which can provoke inflammation by immunological sensitization and cumulative exposures through up to four different mechanisms – the most prominent of which is the production of IgE antibodies in response to exposures to an antigenic substance which can cause a detectable immune reaction. Antigens that provoke an IgE response are characterized as allergens.

Antigens and allergens are relatively large molecules and typically proteins. However, there are certain highly reactive compounds such as formaldehyde, (HCHO)  toluene diisocyanate (TDI) and trimellitic anhydride (TMA) which can complex with proteins to produce hapten antigens which in turn induce allergic responses. 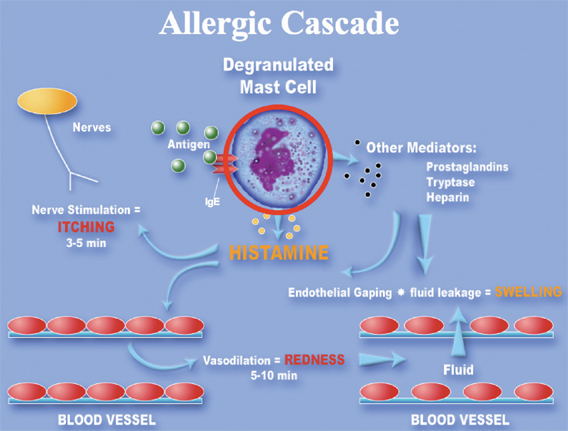 These factors can be synergistically amplified if the indoor air also has poor ventilation and a lack of fresh air exchange.

A little known fact is that elevated carbon dioxide levels from tightly built buildings and homes INCREASES respiration rate, and therefore the intake of allergens and other bioaerosols that cause respiratory irritation and inflammation.